Next Sunday 27th September 2015, hundreds of cities all around the world will be celebrating a quite curious claiming event called The Distinguished Gentleman’s Ride.

The main idea overtone is try to bring attention to a quite burning issue as prostate cancer is nowadays, and fund raising for research.

The Distinguished Gentleman’s Ride was created in Sydney in 2012, inspired by a scene from one of Mad Men episodes TV show, where one of its main characters, Don Draper appeared riding a vintage motorbike wearing a stylish suit.

The Distinguished Gentleman’s Ride decided to choose a stylish and cared style as a way to defeat the negative stereotype associated in certain occasions with motorbike riders.

That first gathering, was able to assemble a crowd of more than 2500 people along 64 cities.

And, although the event’s name is “The Distinguished Gentleman’s Ride”, by all means it’s open to all the ladies that want to join supporting this initiative.

The event is free (although any small contribution will be of a great help), and as in every charity related event, it will be a joyful and colourful day, where is expected to see well-mannered gentleman wearing starched shirts, custom-made vests and suits, impeccable shaped beards and moustaches, and motorbikes. Mostly those will be Café Racers, Bobbers, Classic, Flat Trackers, Scramblers…. Although many others will attend regardless the motorbike they have for sure.

More than 11,000 people gathered in 145 cities around the world, raised about 277,000 USD funds for prostate cancer research.

More than 20,000 people gathered in 257 cities from 58 countries around the world, and about 1.5 million USD funds were raised for prostate cancer research.

The aim for 2015 gathering is try to achieve the 3 million USD fund raising.
Don’t miss to sign in for the The Distinguished Gentleman’s Ride 2015 , and if you want to make a donation, here is the web site where you’ll be able to do so. 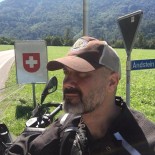